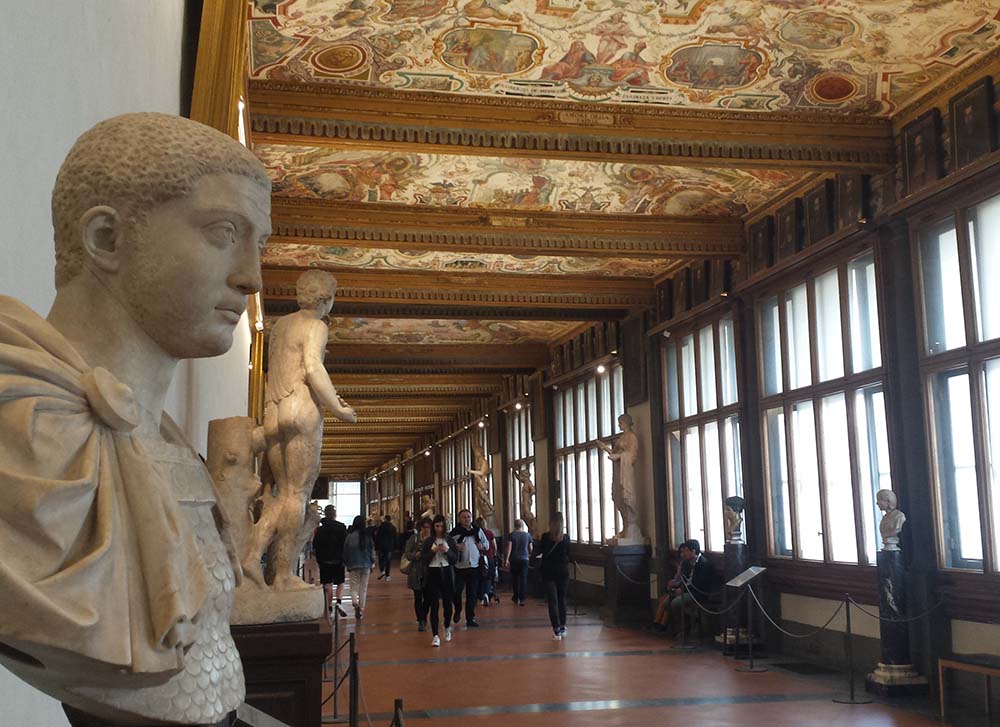 The Uffizi Gallery of Florence houses the most important collection of Renaissance paintings in the world.

The Uffizi Palace was built under the rule of Grand Duke Cosimo I in 1560 as the administrative centre of the state housing the most important "Magistrature" of the city.

The project was due to Giorgio Vasari, the Grand Duke's favourite painter and architect. The palace is his masterpiece of architecture, an aerial building in a “u” shaped plan, made of "pietra serena" (a type of sand stone), lovely contrasting with the white plaster.

In 1565, when the building was almost finished and Cosimo had moved the residence of his family to Pitti Palace, Vasari was asked to realize a private, aerial passageway, connecting the Uffizi to Pitti Palace, what we call today the Vasarian Corridor.

The corridor was a useful and secure way to move without guards from the Government Palace to their new residence (an astonishing view of the Corridor will be available from the windows of the Gallery).

Giotto, considered to be the painter who paved the way for the Renaissance; Filippo Lippi, a friar-painter much admired by Cosimo the Elder, master of Botticelli and also father of the great painter Filippino Lippi, also present in this collection with important works of art.

Botticelli’s harmony of his two most famous paintings: “the Birth of Venus” and “Spring”, both of them painted for the Medici family, with their intriguing symbolism; Leonardo da Vinci’s “Annunciation”, painted when the master was only 20 years old, but already showing his colour shading technique characterized by subtle transitions between colours, thus creating an atmospheric haze; the marvellous “Tondo Doni” by Michelangelo, the only painting in the gallery definitely by great master, still in its original frame, also designed by Michelangelo; some of the most famous works by Raphael, the portraits of the two Popes Julius II and Leo X; to finish with the Venetian painter Titian, the official painter of the Emperor Charles V, the most versatile of the Italian painters.

The aim of our Uffizi Gallery Guided Tour is not to rush through the Gallery, but instead, to observe selected works in depth and using the Gallery as a visual text, you will be told the history and evolution of Florentine art.