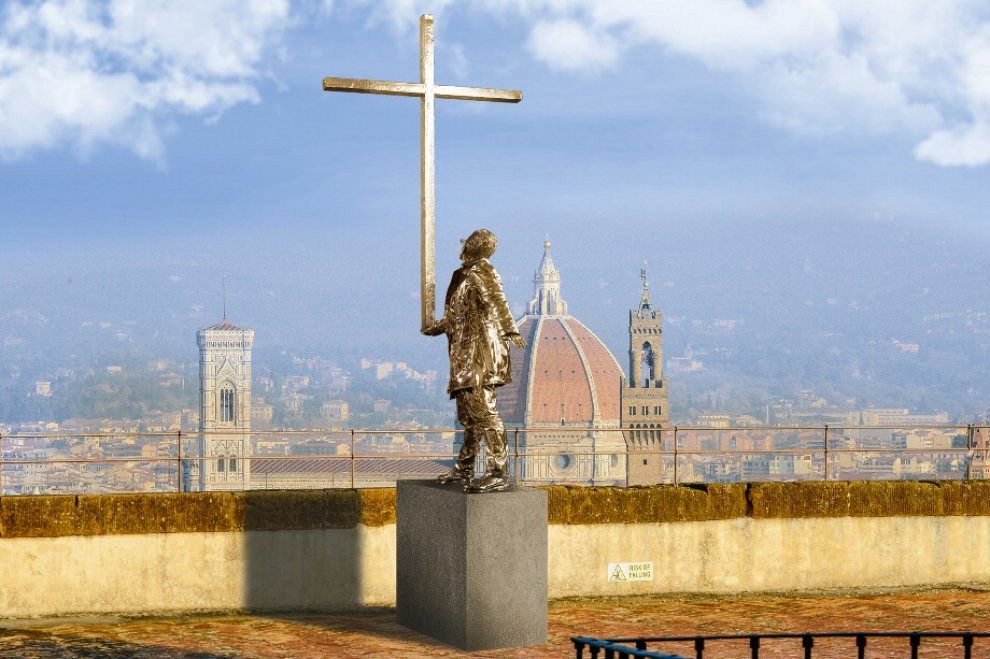 From Saturday, May 14, Forte di Belvedere will be hosting the great contemporary artist Jan Fabre, one of the most innovative and original artistic personalities with the ability to cross a variety of expressive forms.

From Saturday, May 14, Forte di Belvedere will be hosting the great contemporary artist Jan Fabre, one of the most innovative and original artistic personalities with the ability to cross a variety of expressive forms.

His artwork has been present on the Florentine scene since mid-April and can be seen outside in the Piazza della Signoria where his “Searching for Utopia” has already charmed and amused thousands of Florentines and tourists with the image of the artist at the wheel of a giant turtle covered in a shiny golden surface. His second piece, also in the square, “The man who measures the clouds (American version, 18 years older)” is placed between Michelangelo’s copy of David and Donatello’s Judith. These two works are part of the exhibition “Spiritual Guards” curated by Melania Rossi and Joanna De Vos with the artistic direction of Sergio Risaliti being hosted at the Palazzo Vecchio and the Forte di Belvedere.

Fabre’s exhibition, between the ramparts and the building at the Forte Belvedere shows sixty works in bronze and wax as well as a number of films focusing on the artist’s historical performances. Seven bronze beetles are places in look-out points while a series of self-portraits cover the corners of the ramparts. The beetles represent angels of metamorphosis and symbolize in ancient religion and in the tradition of Italian and Flemish painting, the passage between life on earth and eternal life in continuous motion.

Jan Fabre, born in Antwerp, Belgium in 1958 is a multidisciplinary artist – a sculpture, playwright, stage director, choreographer and designer. He studied at the Municipal Institute of Decorative Arts and the Royal Academy of Fine Arts in Antwerp. He wrote his first scripts for the theater between 1976 and 1980 and also did his first solo performance. In 1978 he made drawings with his own blood during the solo performance 'My body, my blood, my landscape'. Fabre is famous for his Bic Art (ballpoint drawings). In 1990, he covered an entire building with ballpoint drawings. This controversial artist was appointed by the Greek Ministry of Culture as the Creative Director of the annual Athens-Epidaurus Festival but he resigned less than two months later, on the 2nd of April 2016, after a huge controversy over his plan to turn Greece’s major arts festival into “a tribute to Belgium” and devote eight of the festival’s ten productions to those from his homeland.

Jan Fabre’s works can be seen in Florence in Piazza della Signoria, Palazzo Vecchio, and Forte di Belvedere until 2 October 2016.