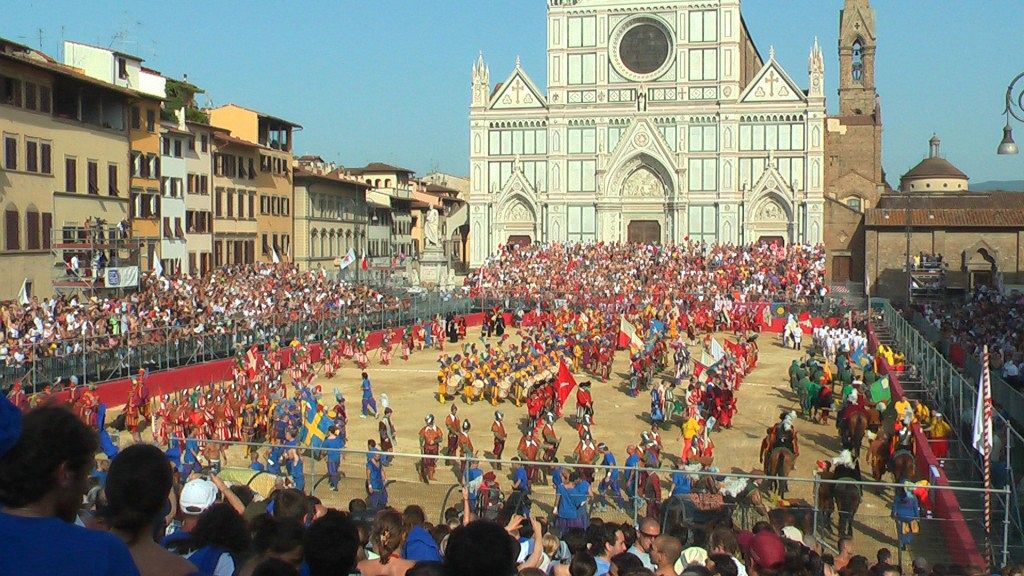 Calcio Storico Fiorentino is said to be the origin of modern ball games (such as football and rugby), this game became very popular in medieval Florence and is still played today.

Calcio Storico Fiorentino is said to be the origin of modern ball games (such as football and rugby), this game became very popular in medieval Florence and is still played today.

Think modern day football and rugby can get a bit aggressive sometimes? Well, Calcio Storico Fiorentino takes things to a whole new level! Said to have been the origin of modern ball games (such as football and rugby), this game, which became very popular in medieval Florence, was very violent indeed!

The origins of this game are believed to date right back to Roman times, when the Roman Army adapted a Greek ball game, and used it as a type of training for the warriors. You can tell it was a violent game right from the offset, as the name given to it literally translated as ‘to rip off’…! Two teams would play on sandy ground using a ball made up of leather and rags. There really was only one objective; get the ball into the opponent’s field… by any means possible! Needless to say, the result was often brutal and bloody.

Over the centuries, this game stared to become incredibly popular. Not only with the noblemen who started to hold official matches, but also with the ‘normal’ Florentines; every available street in Florence was used as a mini pitch for groups of youngsters!

As you walk through the ancient streets and squares whilst on your private tour of Florence, you’ll be able to imagine the young Florentine boys who spent their days kicking a ball around!

After a long break of a couple of hundred years, this aggressive game was revived in Florence. In 1930, a tournament was organised between the four historical quarters of the city, and this tradition is still carried out today. In fact, Calcio Storico has now become one of the most important historical manifestations in Florence. There are three matches played every year during the month of June, with the exciting final being played in the Piazza Santa Croce on the 24th.

The rules have changed somewhat since medieval times, but the basic idea still remains; two teams of 27 men play on a sandy pitch for 50 minutes, desperately trying to put the ball into the other team’s net, which runs along the width of each end of the pitch. Players can use their feet and hands, and there is a referee, just in case a fight breaks out! Luckily, tactics such as sucker punching and kicks to the head are not allowed…but head-butting, punching and choking are!

So why not enjoy a walking tour of Florence; the very place where this brutal medieval game began! We have a wide selection of tours of Florence, including a Medieval Florence tour, where you can explore the museums and Basilicas of this stunning city. There’s a visit to the Piazza Santa Croce too, but if you go in June, watch out for 2 large groups of men hurtling towards you!